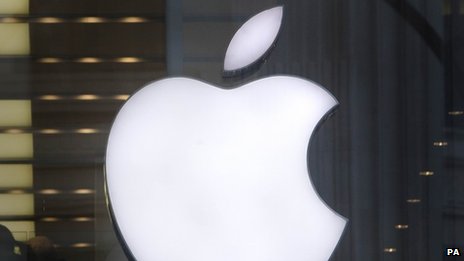 The pay award, which amounts to 113,334 shares, was revealed in a regulatory filing to the Securities and Exchanges Commission (SEC).

Apple announced the appointment of Ms Ahrendts in October, but she only started her job on 1 May.

She was previously chief executive of UK luxury retailer Burberry.

Ms Ahrendts will receive 85% of the shares as long as she stays with Apple for four years, regardless of performance.

She will receive the shares award over a number of vesting periods beginning on 1 June 2014 and ending on 14 June 2018.

At Monday’s closing price the second tranche would be worth $13.6m.

The pay package makes her among the most highly paid female executives in the world.

In 2012, a survey by corporate governance group Manifest and pay consultancy MM&K found that Ms Ahrendts was already the best-paid chief executive in the FTSE 350, taking home a total of £16.9m in salary and stock awards that year.

She is the first woman to be appointed to Apple’s board of directors in a decade and will take charge of its global retail and online stores, which employ around 42,400 people.

Ms Ahrendts was credited with the turnaround of Burberry doubling sales thanks to overseas expansion, while the retailer’s share price rose by 250% under her tenure. She was appointed chief executive in 2006.

Burberry has seen significant overseas growth, particularly in China. As of last year three-quarters of Burberry stores were located in emerging markets.

In contrast nearly half of Apple’s 431 stores are in its home market of the US. Despite this only 31% of Apple’s revenues in the past quarter came from America.

Apple is in a battle with chief rival Samsung for dominance in the smartphone market, particularly in markets such as China.

The US technology giant has previously said it expects to open 30 new retail stores this year. Two-thirds of those stores will be outside the US.

It recently opened stores in Brazil and Turkey taking its global presence to 15 countries. At the beginning of the year Samsung announced a five year deal with Carphone Warehouse that will see 60 Samsung branded stores open across Europe.

Last month Apple reported profits of $10.2bn (£6.1bn) for the three months to the end of March after selling 43.7 million iPhones in the quarter .